Don’t look now but it sure looks like those in the swamp are starting to get flustered about this week’s planned rallies in support of President Donald John Trump.

The DC Mayor, who happens to share her name with the villain from Super Mario Brothers (just sayin’), Muriel Bowser is concerned enough about this weeks ‘Stop The Steel’ rally.  Concerned enough that she has announced that she is deploying the National Guard to keep the peace.

Another fine example of Democrat projection.  Perhaps she fails to remember that it is when the left assembles that there is violence, property damage, littering and mayhem. Take for instance Portland and Seattle.

In my personal experience, when the hard working, blue and white collar Trump supporters rally, 99 times out of 100, it is a big love fest, completely free from violence and certainly without property destruction.

The Gateway Pundit is reporting:

‘Washington, D.C. Mayor Muriel Bowser has called out the National Guard for the pro-Trump Stop the Steal rallies scheduled to take place in the nation’s capital Tuesday and Wednesday. D.C.’s acting Chief of Police Robert J. Contee III warned protesters that the city’s strict gun laws will be enforced as it is against the law in D.C. to exercise one’s Second Amendment rights while exercising one’s First Amendment rights. Contee ordered posters put up in the protest areas reminding visitors of the city’s carry prohibitions. 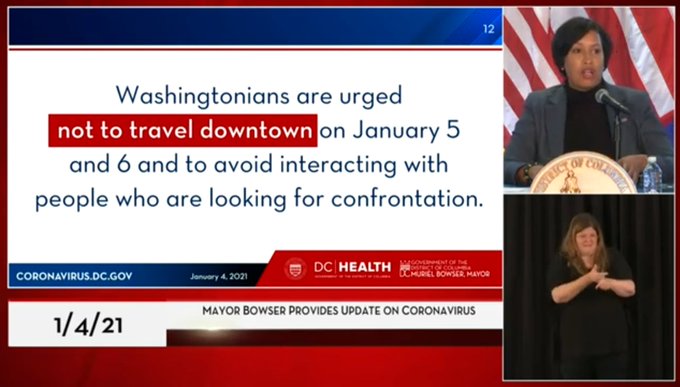 Bowser is also urging Washingtonians and people in surrounding areas to stay away from D.C. during the rallies. Rumors have been spreading that Bowser is shutting down hotels and pther businesses for the rallies but that is not true. The Hotel Harrington decided to close for the rallies after getting pressure for allowing the Proud Boys to congregate there. Indoor dining in D.C. is closed due to COVID lockdowns. Street parking will be greatly restricted in the protest areas.

Bowser’s instructions for the National Guard state they are to be unarmed and not engage in “domestic surveillance, searches or seizures of US persons.” The Guard is reportedly being called out to help with traffic and crowd management in support of law enforcement.’ 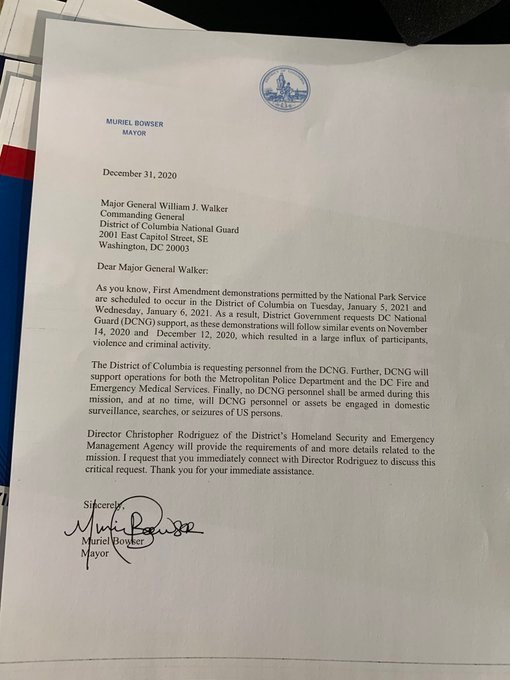 I am not legal scholar, however, I am pretty sure that the law referenced in the following slide is not Constitutional:

It states ‘Members of the public and anyone attending the events are reminded that District law prohibits anyone from carrying a firearm within 1,000 feet of any First Amendment activity.’ 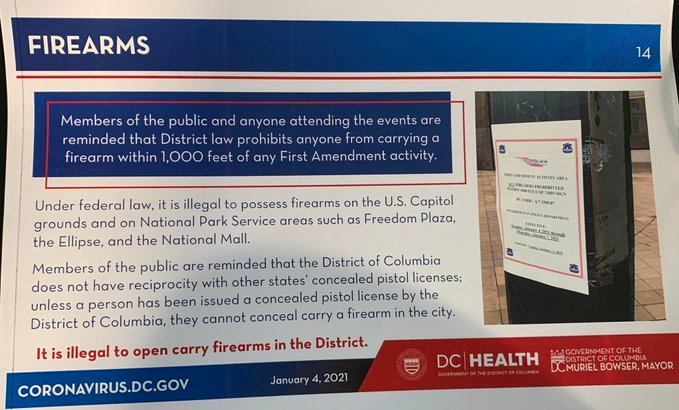 Since when are our God given rights, as enumerated in the US Constitution a ‘pick one’ proposition.  I can speak freely and exercise my right to self defense at the same time and so can you.

I am by no means suggesting anyone break these carry laws, I am just wondering what they are so worried about?

Joe Biden ‘Does Not Have’ the ‘Cognitive Ability’ To Be POTUS: Fmr White House Physician

Facebook is doing everything they can to keep you from seeing our content! Please enter your email so we can make sure you see our posts and avoid the CCP owned, MSM propaganda!