BREAKING: Trump Posts A Meme That Has The Whole World Going CRAZY

45th President Donald Trump shared a meme featuring himself as Speaker of the United States House of Representatives in an apparent hat tip to Rep. Matt Gaetz, who voted for the former president for the position on Thursday afternoon.

In the meme, Trump can be observed making a funny gesture while standing next to Vice President Kamala Harris, and behind Joe Biden in Congress, presumably at Biden’s State of the Union address.

As Valiant News reported earlier today, Gaetz cast his vote for President Trump to be the next Republican House Speaker on Congress’ third day of deadlock, amid an effort by roughly 20 GOP representatives to prevent Rep. Kevin McCarthy (R-CA) from taking the gavel. 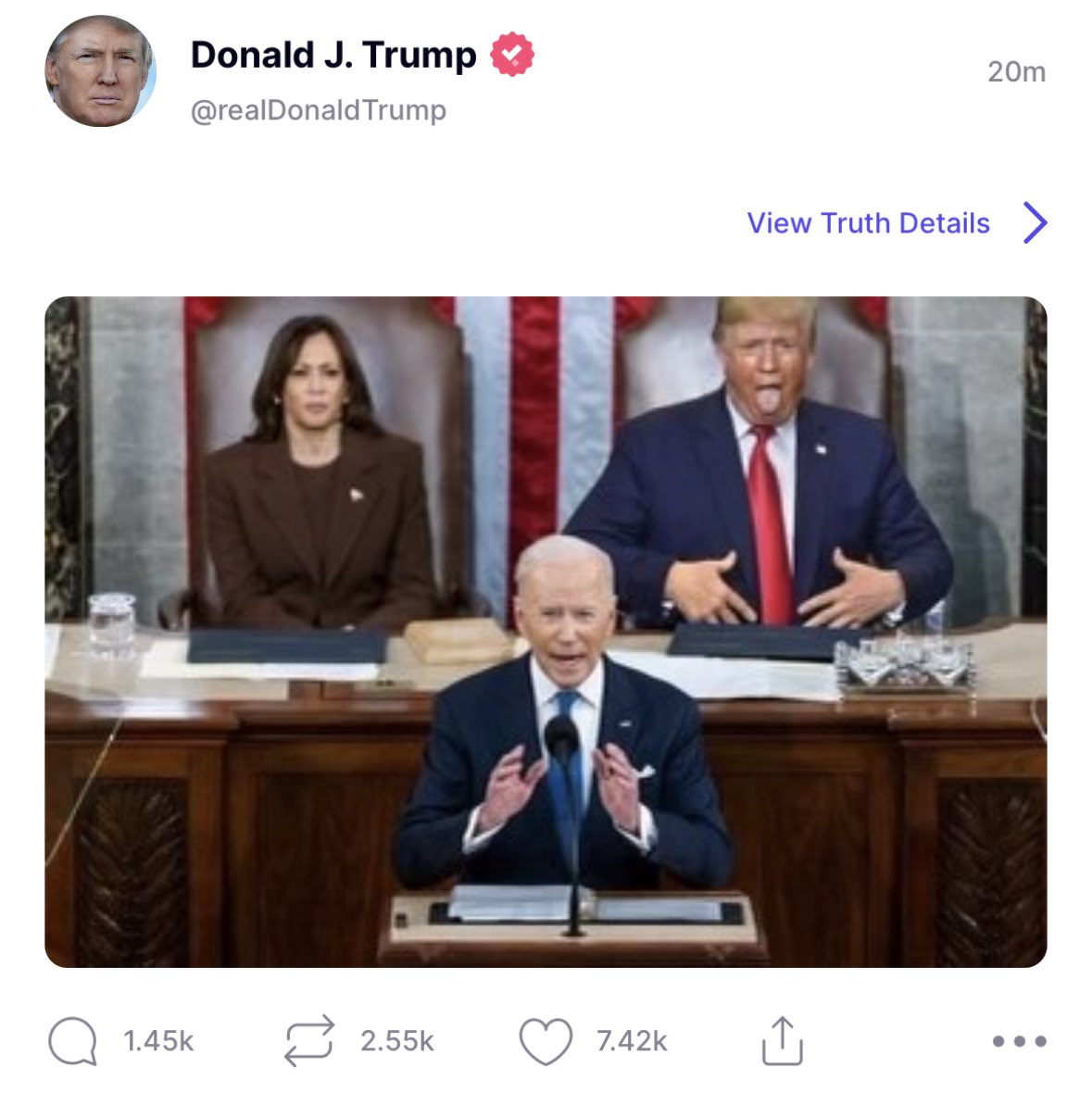 The Representative for Florida’s 1st District voted for the former President during the seventh vote for the Speaker on the House, the first vote on the third day of doing so. McCarthy has failed to take the position after numerous rounds, the first time this has happened in 100 years.

Initially, a group of around 20 Republicans had chosen to back Ohio Rep. Jim Jordan as a more conservative alternative to McCarthy, but Jordan, who seems to prefer chairing the House Judiciary Committee, stood by McCarthy.

African American GOP Rep. Byron Donalds, also of Florida, became the anti-McCarthy candidate for the subsequent rounds of voting, with Gaetz backing Donalds until his surprise vote for Trump.

My vote for Speaker of the House today?

Gaetz’ move revitalized conservative calls for President Trump to make an attempt at the gavel, despite his fervent support for the failing McCarthy.

Following the vote, “Trump for Speaker” trended on Twitter at number five in the United States, with many supporters of the former President’s America First agenda backing the move. Gavin Wax of the New York Young Republicans declared that we are now in “the best timeline.”

Gaetz votes for Donald Trump to be speaker.

belief that the ongoing debate for House Speaker will benefit the country in the long run.

“Very good things are happening behind the scenes for the Republican Party. Intense but Smart negotiations between GREAT and PATRIOTIC people are ongoing. They all love our Country, and want something to go forward, ASAP. This ‘event’ will end up making the Republican Party STRONGER and more UNITED than ever before. OUR NATION IS AT STAKE. Stay tuned and, MAKE AMERICA GREAT AGAIN!” Trump wrote in a Truth Social post Thursday.

President Trump signalled his approval of the lengthy Speaker decision process and argued that a similar process will ensue when he wins the 2024 Presidential election.

“I actually think that a big Republican VICTORY today, after going through numerous Roll Calls that failed to produce a Speaker of the House, has made the position & process of getting to be Speaker BIGGER & MORE IMPORTANT than if it were done in the more traditional way, much like me again becoming President after having won big in 2016, gotten many Millions of MORE VOTES in 2020 but ‘supposedly’ not winning (BIG LIE!), & then winning again in 2024. It will be BIGGER than the traditional way!” he added.

← Previous Story BREAKING: Supreme Court To Hear Case To OVERTURN 2020 Election!
Next Story → BREAKING: Donald Trump Get Votes For Speaker of The House!

MarioKeo January 6, 2023
| |
Making money online more than $15k just by doing simple work from home. I have received $18376 last month. Its an easy and simple job to do and its earnings are much better than regular office job and even a little child can do this and earns money. Everybody must try this job by just use the info on this page Open The Link.....> Www.OnlineCash1.com
0 0
0
Reply