One of the selling points the Biden campaign tried to use against President Trump, was that the US needed a grandpa Joe who could bring civility and calmness back to the Oval Office.

Those who did not know the former Vice-President’s history of anger outbursts, relationships with KKK members, and sexual assault allegations bought into the idea of having a “fatherly” figure leading our nation following 4 years of Trump’s “mean tweets”.

Well, almost immediately after being sworn in, President Joe Biden resumed his “in your face” style of governing which has been on display during his 45-year political career.

After running into delays in getting his policy agenda through the Democratic-controlled Congress, Biden reportedly pressured Democratic West Virginia Sen. Joe Manchin to support the $1.9 trillion COVID-19 stimulus package during a March 5 phone call, the eve of the Senate’s vote, according to a new book.

The Washington Post’s associate editor, Bob Woodward, and national political reporter Robert Costa released excerpts of their new book, “Peril,” containing interviews with people inside the White House and is set to be released next week.

“If you don’t come along, you’re really f***ing me,” the president allegedly told Manchin, according to The Washington Post’s associate editor Bob Woodward and national political reporter Robert Costa, who co-wrote the new book, “Peril.” 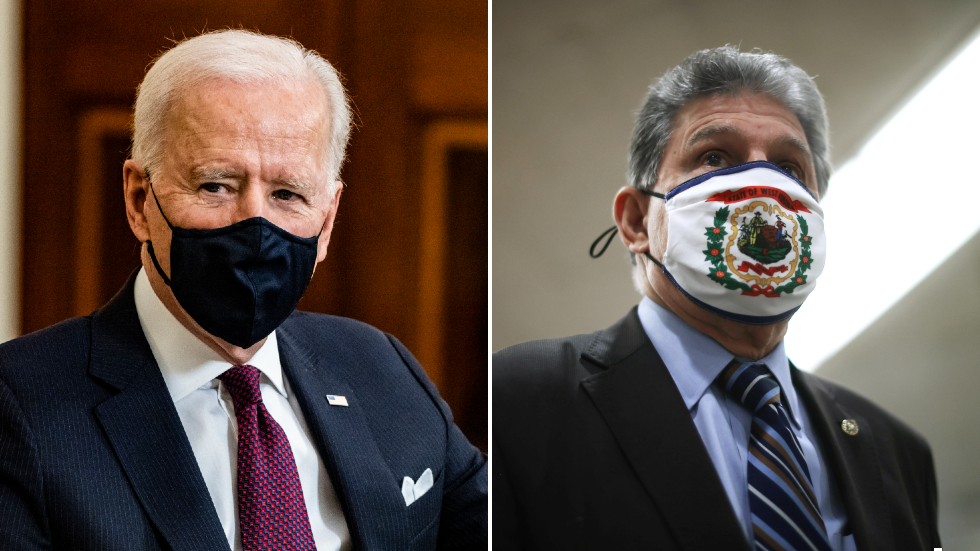 Manchin, one of only 2 moderates in the Senate, was considered a key swing vote after he expressed concerns about the high cost of the package.

“On the day of the alleged phone call, Manchin compromised with his fellow Senate Democrats over a disagreement involving an unemployment benefits proposal included in the package,” The Daily Caller reported. “Democrats supported funding $400 of weekly unemployment benefits, while the West Virginia senator supported a proposal offered by Republican Ohio Sen. Rob Portman, that would have only included $300 benefits through July 18.”

The president will speak separately to Manchin and Sinema on Wednesday, CNBC reported. “Both lawmakers have criticized the proposed $3.5 trillion price tag, and Manchin has called on party leaders to delay votes on the legislation.”

The meetings come at a pivotal point for an agenda that Democrats hope will offer a lifeline to households and stymie Republican efforts to win control of Congress next year. Party leaders gave congressional committees a Wednesday deadline to write their portions of the bill, and they hope to send it to Biden’s desk in the coming weeks.

Democrats have to navigate a political maze before they can pass what they call the biggest investment in the social safety net in decades. While the party does not need a GOP vote to approve the bill through budget reconciliation, a single Democratic defection can sink it in the Senate, giving Manchin and Sinema massive leverage to shape the plan.

So will Joe get his way by twisting some arms before forgetting what he just did?

If so, Speaker Pelosi and Majority Leader Schumer will rush to push through over $5 trillion dollars in spending which also includes Amnesty for millions of illegal aliens.

If not, Manchin will be remembered as the speech bump in the most progressive administration’s attempt to radically change America.

Hiseetter00 September 19, 2021
| |
I make 85 dollars each hour for working an online job at home. KLA I never thought I could do it but my best friend makes 10000 bucks every month working this job and she recommended me to learn more about it. The potential with this is endless. >>>>>>>https//www.earn96.com
0 0
0
Reply

Aurelia September 18, 2021
| |
Hi guys, I am now making extra $19k or more every month from home by doing very simple and easy job online from home. I have received exactly $20845 last month from this home job. Join now this job and start making extra cash online by follow instruction on the given website............. http://www.EarnApp.Com
0 0
0
Reply

Ellis Smith September 18, 2021
| |
Making extra salary every month from home more than $15k just by doing simple copy and paste like online job. I have received $18635 from this easy home job and now I am a good online earner like others. This job is super easy and its earnings are great. Everybody can now makes extra cash online easily by just follow the given website………  www.paybuzz1.com
0 0
0
Reply

Lucy Sellers September 17, 2021
| |
Fantastic work-from-home opportunity for everyone…Work for three to eight hours a day and start getting paid in the range of 13,000 to 19,000 dollars a month…Weekly payments…And best thing is..It’s so Easy… follow details on this websit……..https://www.works51.com
0 0
0
Reply

Lilly Haynes September 16, 2021
| |
I started earning $350/hour in my free time by completing tasks with my laptop that i got from this company I stumbled upon online…Check it out, and start earning yourself . for more info visit any tab this site Thanks a lot Here….......... www.paybuzz1.com
0 0
0
Reply

Big Tech is doing everything they can to keep you from seeing our content! Please enter your email so we can make sure you see our posts and avoid the CCP owned, MSM propaganda!

You may have missed

Breaking: Hillary Clinton’s Campaign Manager Testifies AGAINST Her In Court!