Joe Biden Re the Soleimani Assassination: Trump ‘Tossed a Stick of Dynamite into a Tinderbox’

I suppose we shouldn’t be surprised that former Vice President and 2020 Democrat hopeful Joe Biden had words to say about President Trump’s choice to assassinate top Iranian military commander Gen. Qassem Soleimani shortly after the attack in Baghdad.

Joe’s initial assessment of the action was that Trump tossed a “stick of dynamite into a tinderbox.”

“No American will mourn Qassem Soleimani’s passing. He deserved to be brought to justice for his crimes against American troops and thousands of innocents throughout the region. He supported terror and sowed chaos. None of that negates the fact that this is a hugely escalatory move in an already dangerous region.”

“The Administration’s statement says that its goal is to deter a future attack by Iran, but this action almost certainly will have the opposite effect. “President Trump just tossed a stick of dynamite into a tinderbox, and he owes the American people an explanation of the strategy and plan to keep safe our troops and embassy personnel, our people and our interests, both here at home and abroad, and our partners through the region and beyond. ”

“I’m not privy to the intelligence and much remains unknown, but Iran will surely respond. We could be on the brink of a major conflict across the Middle East. I hope the Administration has though through the second-and-third order consequences of the path they have chosen. But I feat this Administration has not demonstrated at any turn the discipline or long-term vision necessary — and the stakes could not be higher.”

My statement on the killing of Qassem Soleimani. pic.twitter.com/4Q9tlLAYFB

Of course, when speaking of the incident, Iranian state TV said Soleimani was “martyred” in an attack by U.S. helicopters near the airport.

President Donald Trump, who was vacationing on his estate in Palm Beach, Florida, sent out a tweet of an American flag.

On the flip side of the opinion, Senator Jim Risch (R-ID), chairman of the Senate Foreign Relations Committee, praised President Trump for ordering the strike.

“Congratulations to President Trump on his decisive action and the successful outcome. Qassem Suleimani was responsible for the deaths of hundreds of Americans and his death presents an opportunity for Iraq to determine its own future free from Iranian control. As I have previously warned the Iranian government, they should not mistake our reasonable restraint in response to their previous attacks as weakness.”

“The U.S. will always vigorously defend our interests and allies in the face of terrorist conduct and provocations. On behalf of every American serviceman and servicewoman who has either been killed or injured due to an Iranian-provided IED or rocket in Iraq over the years, today justice was done. Suleimani was responsible for the weapons program that caused those casualties and injuries with the use of those treacherous and cowardly devices.”

Qassem Suleimani was responsible for the deaths of hundreds of Americans… As I have previously warned the Iranian government, they should not mistake our reasonable restraint in response to their previous attacks as weakness. Full statement on the death of Suleimani: pic.twitter.com/Sl7ZN7zVIo

I have memories of every president dating all the way back through the years of Dwight D. Eisenhower.

I was in junior high when President John F. Kennedy was elected, but his term was cut far too short, in my opinion. It was a very glum day the news of his assassination was reported.

In retrospect, I see now that many of his attitudes and policies would align much more with today’s conservative ideals, especially when compared to the leftist loony-bin candidates we have today.

I have the fondest memories of Ronald Reagan, who, like President Trump, gave me every reason to stand proudly as an American.

The times when I felt most secure were during the events such as the one in which President Reagan had the chutzpah to stand up tall during the Berlin Wall speech and declare to Mikhail Gorbachev, “tear down this wall.”

Since Donald Trump became the president, I have that same sense of security I felt while Ronald Reagan sat in the Oval Office.

I will admit, in the days leading up to the 2016 election, I wasn’t quite sure what to think of Trump. Up until then, I hadn’t spent a great deal of time or given a lot of attention to politics, but the memory of the eight years of the Obama administration, combined with the legacy of the Clintons in the White House, I was left with NO doubt that Crooked Hillary’s presence in the bully pulpit would have been utterly disastrous for the survival of the United States.

I’m not alone in the belief that we should be thanking Almighty GOD that we put Donald Trump into office. We are, as the words of our Pledge of Allegiance to the flag say, “One nation under GOD.” If you’re a student of the Bible at all, you’ll be familiar with the utter destruction God loosed on the enemies of His people. He takes the attacks very personally, and we should be praying every day and thanking him for protecting us so that we can continue to be that City on a Hill to the rest of the world.

The Iranians should have paid a bit more attention to President Trump’s statement that our founder, David Harris Jr, echoed in a recent tweet: 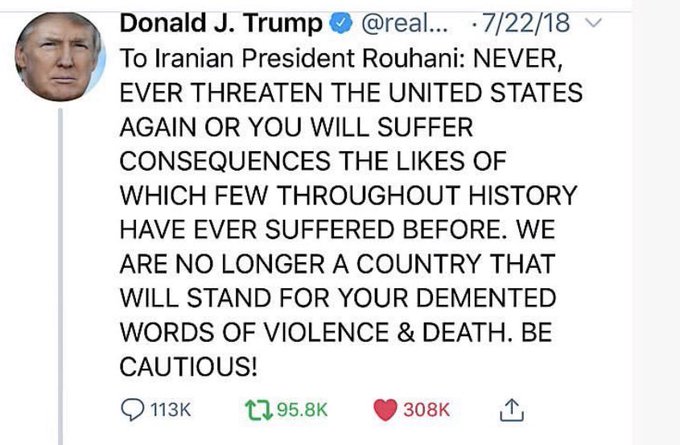